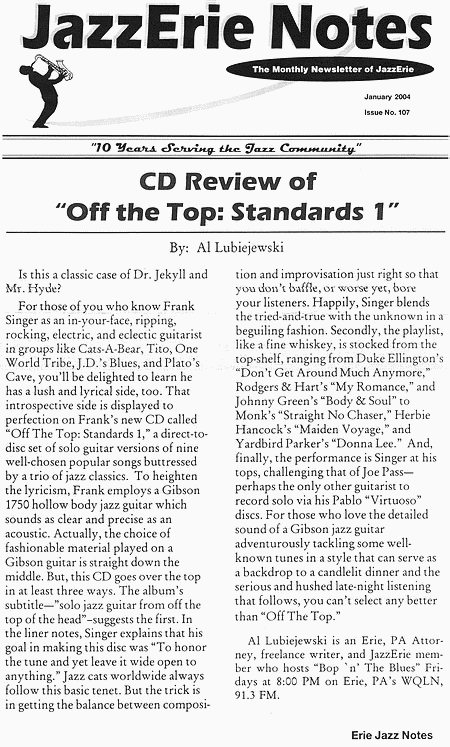 CD Review of "Off The Top: Standards 1"  [ Article by Al Lubiejewski ]

Is this a classic case of Dr. Jekyll and Mr. Hyde?

For those of you who know Frank Singer as an in-your-face, ripping, rocking, electric, and eclectic guitarist in groups like Cats-A-Bear, Tito, One World Tribe, J.D.'s Blues, and Plato's Cave, you'll be delighted to learn he has a lush and lyrical side, too.
That introspective side is displayed to perfection on Frank's new CD called "Off The Top: Standards 1," a direct-to-disc set of solo guitar versions of nine well-chosen popular songs buttressed by a trio of jazz classics.
To heighten the lyricism, Frank employs a Gibson 175D hollow body jazz guitar which sounds as clear and precise as an acoustic.
Actually, the choice of fashionable material played on a Gibson guitar is straight down the middle.
But, this CD goes over the top in at least three ways.
The album's subtitle - "solo jazz guitar from off the top of the head" - suggests the first.
In the liner notes, Singer explains that his goal in making this disc was "To honor the tune and yet leave it wide open to anything."
Jazz cats worldwide always follow this basic tenet.
But the trick is in getting the balance between composition and improvisation just right so that you don't baffle, or worse yet, bore your listeners.
Happily, Singer blends the tried-and-true with the unknown in a beguiling fashion.
Secondly, the playlist, like a fine whiskey, is stocked from the top-shelf, ranging from Duke Ellington's "Don't Get Around Much Anymore," Rodgers & Hart's "My romance," and Johnny Green's "Body & Soul" to Monk's "Straight No Chaser," Herbie Hancock's "Maiden Voyage," and Yardbird Parker's "Donna Lee."
And, finally, the performance is Singer at his tops, challenging that of Joe Pass - perhaps the only other guitarist to record solo via his Pablo "Virtuoso" discs.
For those who love the detailed sound of a Gibson jazz guitar adventurously tackling some well-known tunes in a style that can serve as a backdrop to a candlelit dinner and the serious and hushed late-night listening that follows, you can't select any better that "Off The Top."