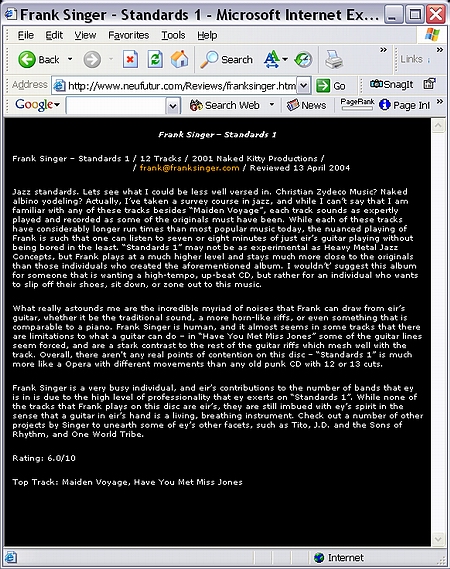 Jazz standards. Lets see what I could be less well versed in. Christian Zydeco Music? Naked albino yodeling? Actually, I’ve taken a survey course in jazz, and while I can’t say that I am familiar with any of these tracks besides “Maiden Voyage”, each track sounds as expertly played and recorded as some of the originals must have been. While each of these tracks have considerably longer run times than most popular music today, the nuanced playing of Frank is such that one can listen to seven or eight minutes of just [his] guitar playing without being bored in the least. “Standards 1” may not be as experimental as Heavy Metal Jazz Concepts, but Frank plays at a much higher level and stays much more close to the originals than those individuals who created the aforementioned album. I wouldn’t’ suggest this album for someone that is wanting a high-tempo, up-beat CD, but rather for an individual who wants to slip off their shoes, sit down, or zone out to this music.

What really astounds me are the incredible myriad of noises that Frank can draw from [his] guitar, whether it be the traditional sound, a more horn-like riffs, or even something that is comparable to a piano. Frank Singer is human, and it almost seems in some tracks that there are limitations to what a guitar can do – in “Have You Met Miss Jones” some of the guitar lines seem forced, and are a stark contrast to the rest of the guitar riffs which mesh well with the track. Overall, there aren't any real points of contention on this disc – “Standards 1” is much more like a Opera with different movements than any old punk CD with 12 or 13 cuts.

Frank Singer is a very busy individual, and [his] contributions to the number of bands that [he] is in is due to the high level of professionality that [he] exerts on “Standards 1”. While none of the tracks that Frank plays on this disc are [his], they are still imbued with [his] spirit in the sense that a guitar in [his] hand is a living, breathing instrument. Check out a number of other projects by Singer to unearth some of [his] other facets, such as Tito, J.D. and the Sons of Rhythm, and One World Tribe.